It was a real bitch of day, all windy and grey and with the morning light as dull and listless as a monk’s hand-shake in Lent. This is when the Hemel-en-Aarde shows itself as the rugged, agriculturally poor and harsh farming land it is, features far removed from the post-card pretty vinelands and vinous splendour too often associated as being requisite for the making of fine wine.

The white-washed gates of Hamilton Russell Vineyards add an air of rural civility to the harsh weather and dry surrounds, and this is where it all began in the Hemel-en-Aarde Valley. Like the Cistercian God-folk who initiated Burgundian wine superiority, pioneer Tim Hamilton Russell may also have believed that the harder you find it to farm, the closer you are to God.

Driving through the vineyards with Emul Ross, who took over as Hamilton Russell winemaker last year, the soils one sees can be described as “perfectly poor”, one of those poncy wine paradoxes useful to employ from time-to-time. It is clay and it’s rocky, it’s hard, and you’ll probably find more nutrients in a Cheese Puff or a Tim Noakes Christmas Lunch Menu.

But this is where Pinot Noir and Chardonnay lives, has lived pretty well, in fact, since 1975 with the first harvest coming in 35 years ago. Vines are planted dense – average 4 500 per hectare – with the Pinot Noir on the lower slopes while the Chardonnay heads up the hill, ending with the oldest block of Chardonnay on the farm planted circa 1986.

I guess yields of five, six tons per hectare, eliciting a subdued negative response from Emul. “That were the case, we’d all be retired. Yields on Pinot are between 3.4 and 2.7 tons per hectare, while the Chardonnay comes in between 3.5 and 4.5. The older vines obviously bring the yields down.”

Since last year, farming has been to organic principles, and Emul points to the rows between the vines that were recently sowed with cover crops. This visit having taken place in early June, rain was still being waited for to get the covers growing which would later lead to living carpets of crawling critter-filled mulch.

“This was all old sheep and wheat land, one of the least fertile parts of the valley,” says Emul. “I’ve only been here two harvests, but tasting the region’s wines I definitely say the power and structure is broader, more muscular here than further up in the Hemel-en-Aarde.”

The 2016’s lie in barrel. Chardonnay casks on the cellar’s ground-floor, with Pinot Noir one level below. François Frères is used exclusively, and I am taken through a range of toastings, blonde and medium, nothing hectic.

Personally, I am not a great analyser of barrel samples, finding these works-in-progress too raw and unstructured for my palate. But during the tasting of these wines – barely five months old – the clarity and comprehensible expressiveness of both varieties was both surprising and enlightening.

The Chardonnays packed lucid character in the citrus, white fruit and nuttiness, with the wines from the older vineyards showing a honeycomb edge. The Pinots were already brimming red berry, sour cherry and understated earthiness – especially those in the lighter toasted barrels.

The enlightening part of the exercise lay in Hamilton Russell’s early release dates, a point of some discussion in wine circles. After this barrel tasting it is obvious that one of the characteristics of site and place is the ability of the wines to hit a sweet spot in their relative youth.

There are few more magical places to taste wine than in a barrel cellar, but Braemar House aka Casa Hamilton Russell, is one. Proprietor Anthony was on top form, while wife Olive had hauled out a spread of oysters, inspired smoked salmon toasties and fillet with wild mushroom risotto as conversation jumped between Pinotage marketing, terroir influence on Havana cigars, hats, Japanese hot-water springs and the novels of Jay McInerney.

Marketing honcho and general Hamilton Russell do-it-all Talita Engelbrecht and Emul were also on hand to bolster the talking, but admittedly some of this got lost on me after Anthony had opened his 2000 Pinot Noir.

My theory on just-released quality had, now, to take a backseat as the focus was on a wine that had aged better and more attractively than Anthony, Olive and Talita combined.

The year 2000 was, as we who woke up with Millennium Party Hangovers shall recall, hot and dry, conditions obviously contributing to the initial tannic ballsiness of the Hamilton Russell Pinot Noir. What had happened over the next 16 years is one of those stupefying and enthralling wine mysteries the detail of which is best left unknown.

A musky feral edge of woodiness and dropped blossom gave the wine a captivating fragrance that swept me away to strange lands that one only finds in dreams. I checked, and it was not Olive’s perfume.

It hit the palate in a cool flow that immediately burst into rivulets of geographical and living sources. Dry clay broken with a gleaming pick-axe. Dried moss on a river pebble lying next to a just-caught wild Brook Trout. A sliver of fresh truffle on the bloody fur of a freshly killed hare.

More to the point, there was a silky – yet angular – thread of sweet bramble, crushed cardamom and syrupped fig-juice with a mouth coating flavour of prunes slowly stewed in Fijian spring water, rose petals optional.

Structurally the wine was showing a Zen-like linearity, all the stars and planets synched, the animals happy and the children smiling and well-fed, while loving couples danced on meadows green and lush.

The new 2015 releases followed: Chardonnay contracting with stoniness, lime and grilled hazelnuts topped with lemon zest. Fresh and riveting, and with an underlying style of bracing energy that Hamilton Russell is known. The Pinot Noir accessible, slight layer of vanilla oak on the nose before the palate dives into black fruit, sage-brush and that satisfying mouthfeel of Pinot complexity.

There was laughter, some silence and a glimpse through the windows down to a valley truly offering heaven and earth. Then the sun came. 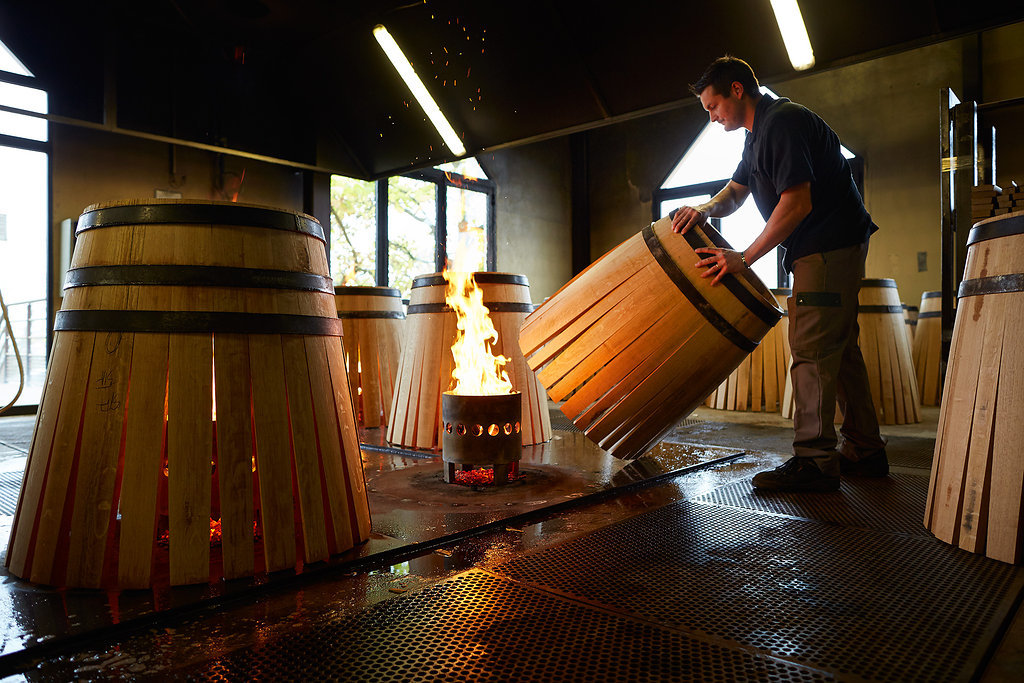