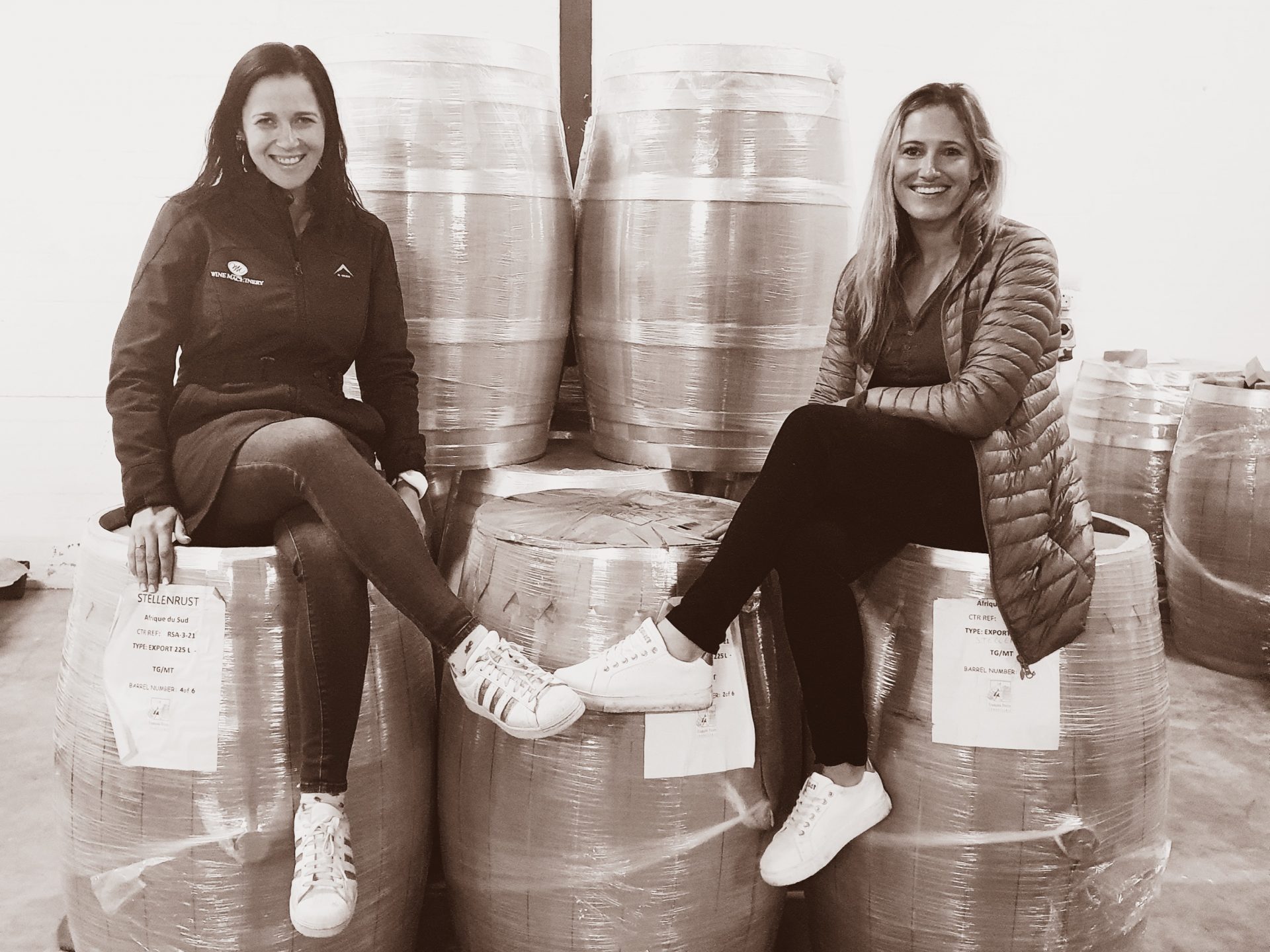 Just popping in to remind you of the correct barrel maintenance techniques.

Once emptied of wine, barrels should be inverted to near the 6 o’clock position, drained and then rinsed with high pressure (100-3,000 psi) cold water for three minutes using a barrel washer with a rotating spray head. Rinsing helps to loosen and remove the gross sediment, which generally consists of yeast lees, pigments, proteins, polysaccharides and tartrates. Hot water rinsing at 60-82°C for three to five minutes may then be required to remove persistent colour or tartrate coatings on the internal barrel surface, with tartrate much more soluble in hot water than cold. Visual inspection of the cleaning efforts can be made via the bunghole with aid of a light. Harder persistent tartrate deposits may require higher temperatures, steaming or alternative treatments. 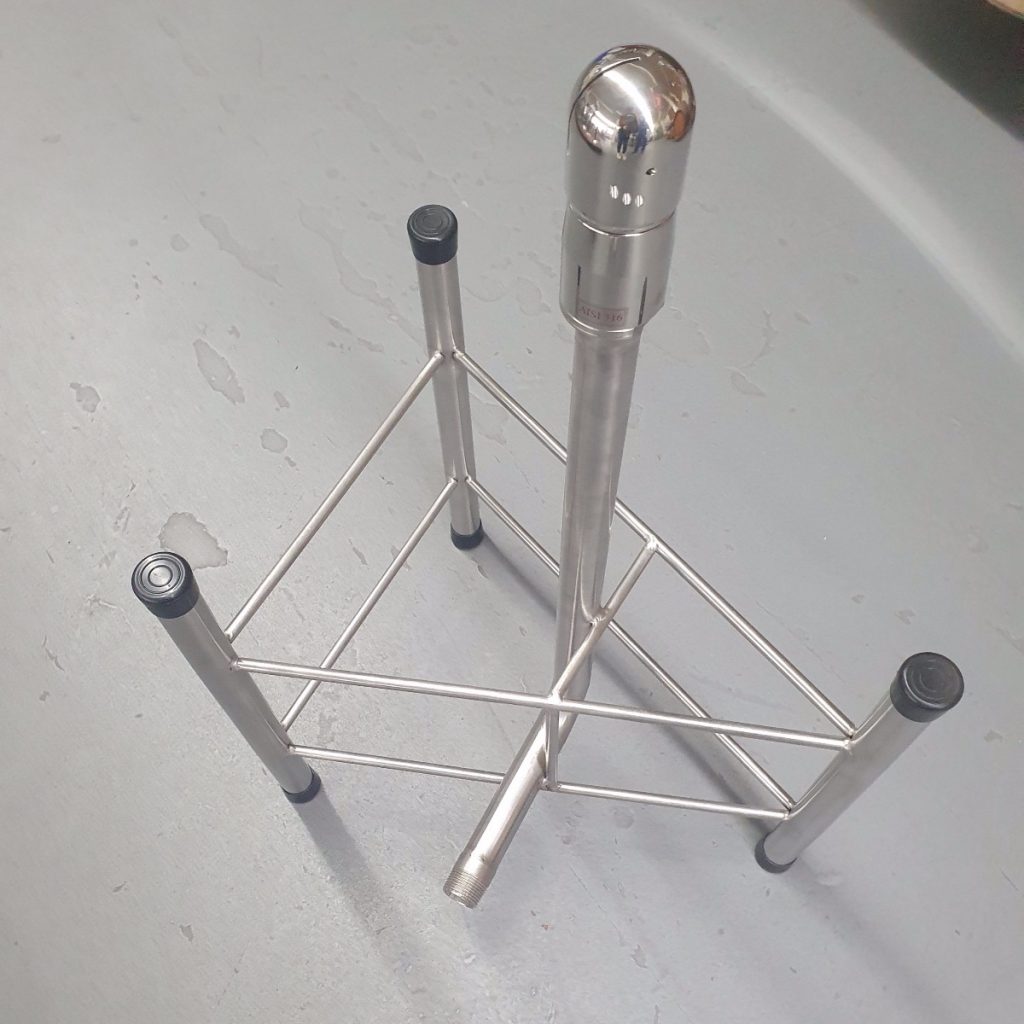 A barrel washer generally contains a rotating spray head attached to stainless steel pipe and framework that can be inserted into the barrel through the bung hole. Pressures used can vary from 100 – 3,000 psi(689 – 20,684 kPa)  There are a variety of barrel washing apparatus options available, some of which are semi-automated. Barrel washers generally require a portable steam generator that connects to the barrel washing device. Steam generators can reduce both water and energy use, and can be used for general cleaning as well as barrel cleaning. The units use dry saturated steam, where 98% of water has been converted into a gas, rather than wet steam or boiling water.

Chemical treatments are preferably avoided. Citric acid (5 g/L) can help dissolve tartrate deposits but may react with cellulose of the wood and possibly compromise staves over time. Sodium carbonate, potassium carbonate or sodium peroxycarbonate (2 g/L) can leach out oak flavour. Chlorine solutions should be avoided due to the risk of forming chlorophenol and chloroanisole taints. Chitosan has been adopted by some winemakers to reduce Brettanomyces cell numbers in affected wines but no information is available on its ability to treat affected barrels.

Microorganisms typically grow in the wine liquid in the barrel, often at the wine/air interface, with increased risk in ullaged barrels or barrels that have not been regularly adjusted to maintain adequate sulfur dioxide levels. Microorganisms can also migrate up to 8 mm into the barrel wood as wine soaks into the wood. This makes it more difficult to completely sanitise a barrel than an inert vessel such as a stainless steel tank. For this reason, barrels must be rigorously cleaned prior to sanitation, to remove any gross solids and colour or tartrate coatings on the surface of the barrel that may impede any sanitation treatments reaching into the barrel wood.

In recent research on barrel sanitation, steam was successful in removing yeast from the cleaned internal surface of the barrel and up to 2 mm into staves, However, none of the treatments tested, including high pressure hot water, steam, ozone, SO2 dissolved in water or SO2 gas were successful in guaranteeing yeast deactivation in grooves or up to 8 mm depth in the staves. More recently, Solis (2018) found steaming was required for at least 10 minutes to achieve temperatures >57.5ºC at a depth of 8 mm within a barrel, which was the temperature required to kill Brettanomyces in this study.

Treating barrel wood with hot water (at least 85°C) for 20 minutes has been shown to be successful in eliminating viable acetic acid bacteria, with the water found to be at about 60°C at the end of the 20 minutes (Wilker and Dharmadhikari 1997). Coulter et al (2003) extrapolated this finding to suggest that filling barrels with hot water at 85°C and holding for 15 minutes was required to eliminate Brettanomyces -infected barrels. A recent study confirmed hot water treatment as an effective option, finding that holding water at 70°C for 30 minutes or 80°C for 20 minutes was able to eliminate Brettanomyces yeast from barrel wood at wood depths of up to 5-9 mm (Edwards and Cartwright 2018).

These temperatures can be achieved by filling barrels with 70°C hot water, the typical temperature achieved from a hot water system, and increasing the temperature by inserting the nozzle from a hot water pressure cleaner. Minimal drop in water temperature occurs over an hour, such that the water can be re-used three or four times before re-heating. Transfer of hot water between barrels could compromise pump impeller integrity, with syphoning an alternative, using a large diameter hose with a metal swan-neck fitting in the top barrel in order to prevent the hose from flattening due to the heat.

Barrels can be tested after sanitation steps by adding 4 L of sterile water or preservative-free filtered wine to a sanitised barrel, rolling the barrel from side to side, then leaving it for 24 hours. The liquid can then be sampled and tested for viable microorganisms.

Shaving and refiring of barrels has been considered an option in the past for sanitising barrels; however, Pollnitz et al. (2000) found that this was not effective in removing all viable Brettanomyces yeast, due to the deeper penetration of yeast cells within the wood. Additionally, both shaving and other physical techniques such as dry ice blasting require removal of a head stave, or deconstruction of the barrel, which is a much more involved process than other sanitation options.

High pressure ultrasound treatment of barrels filled with hot water has been reported to be effective in treating Brettanomyces in barrel wood, but requires access to specialised equipment. Breniaux et al (2019) found high power ultrasound combined with heat at 60ºC/6 minutes eliminated viable Brettanomyces yeast at depths of up to 9 mm in wood.

Ozone and microwave treatments also require specialised equipment, but have not been pursued as viable barrel treatment options in research published in the last ten years.

6. Barrel Topping And SO2 Checks

A new barrel can adsorb 5-6 L of wine and thus should be re-topped up two weeks after being filled, and then every 2-3 months. The concentration of free SO2 will decline faster in barrel than in tank due to greater oxygen exposure and should be checked every 3 months. It is advisable to add a larger addition of SO2 post MLF (80 mg/L) to ensure adequate levels of free SO2 are achieved from the outset during barrel ageing. Humidity in cellars between 65 and 75% is optimum. Lower humidity will encourage greater wine evaporation and higher humidity can encourage growth of spoilage microorganisms.

How Barrels Should Be Stored.

New barrels can be left in plastic film and stored in a clean area with 65-75% humidity. If used or emptied barrels are not to be immediately refilled with wine, then they can be stored dry or wet.

Rinsing the barrels after wet or dry storage is very important as any residual elemental sulfur or SO2 can lead to greater levels of bound SO2 in must or wine added to the barrel and could inhibit yeast or malolactic acid fermentations and/or increase risks of sulfide formation. Residual acid in barrels following wet storage can also have a negative impact on wine if it not rinsed away.

Red wine stains, vinegar flies or mould or microbiological growth on the outside of barrels (particularly around the bung hole and often caused by spills or insufficient cleaning after topping or sampling) can be removed with a scrubbing brush and using a crude solution of 1:1 solution of SO2 and citric acid, followed by rinsing the area with water. Again, use of chlorine should be avoided on wine barrels. Larger occurrences of mould can indicate that the cellar humidity is too high (>75%).